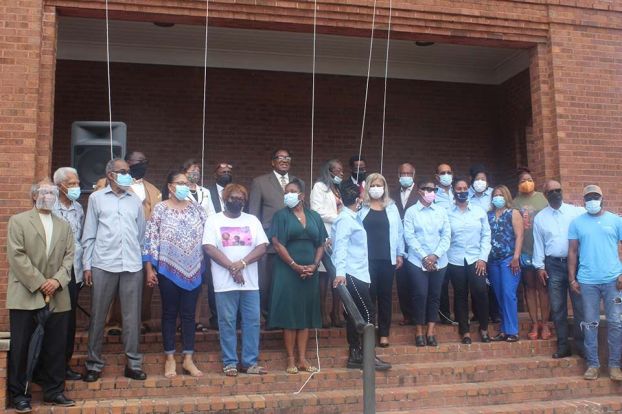 The goal came to fruition on Tuesday with the unveiling of the J.L. Chestnut Jr. and Bruce C. Boynton Judicial Building.

“It’s a great day in Selma to celebrate the dedication of the new building named after J.L. Chestnut Jr. and Bruce C. Boynton,” Nunn said. “Dallas County citizens wanted this and we made it happen.”

Chestnut, who died in 2008, was the first black attorney in Selma. Boynton who began the Freedom Riders in the 1960s, died last year.

“They were the first two black attorneys in Selma, it needed to be named after them,” Betty Boynton said.

State. Representative Prince Chestnut, D-Selma, said it was an honor learning from his cousin.

“JL Chestnut, Jr. worked so hard to make life easier for the underdog,” Chestnut said. “He sacrificed for the betterment of others. He was my older cousin and a mentor.   I learned at his feet and I’m thankful for the lessons.

“The work he did for nearly five decades, particularly in the 50s and 60s representing marchers and leaders in that courthouse, makes it an appropriate honor.”

Chestnut and Boynton were both praised throughout the dedication for being pioneers during the racial injustice of the 1950’s and 60’s.

“Bruce was the most thorough lawyer I knew,” Dallas County Circuit Court Judge Collins Pettaway Jr. said. “I was a partner with J.L. He molded me into the lawyer I am today.”

Selma Mayor James Perkins Jr., the city’s first African-American mayor, said it was important for him to acknowledge what Boynton and Chestnut accomplished.

“Boynton and Chestnut are two legends that deserved this honor,” Jackson said. “J.L. Chestnut was the best trial attorney I have seen in the courtroom.. Bruce Boynton was courageous and had a brilliant mind.”

“It is befitting and historic to see,” Siegelman said. “It shows that things can change.”