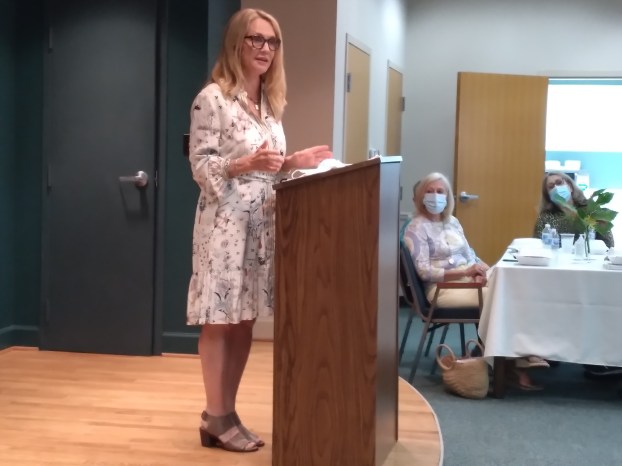 Imagine you’re on a sinking ship. You have 45 minutes to save yourself and your family. There are four lifeboats, but only two of them work.

What would you do? Also, how would surviving such an experience change you?

Those are issues New York Times bestselling author Patti Callahan Henry explores in her book “Surviving Savannah,” which she discussed during her appearance at the Selma Dallas County Public Library on Thursday.

Her appearance, her third here, marked the kickoff of the Lunch at the Library Fall 2021 series. The series had to be canceled last year due to the pandemic. Thursday’s luncheon drew about 40 people.

“Everybody brings their own stories today of what these long 18 months have been about, and those stories become our stories.”

Callahan Henry is a best-selling author of 16 novels and the host of the weekly Friends and Fiction web show and podcast. Among her notable works was 2018’s “Becoming Mrs. Lewis,” about the improbable love story between Joy Davidman and C.S. Lewis.

Callahan Henry’s “Surviving Savannah” is a work of historical fiction about the 1838 explosion and sinking of the steamship Pulaski off the coast of North Carolina.

The ship’s remains were discovered three years ago 40 miles off the coast of North Carolina and 115 feet down. The ship was traveling from Savannah, Georgia, to Baltimore. About half of the 200 passengers died. Some of the nation’s most wealthy people were on board.

Ironically, one of the issues faced by the characters in the book is not all that different than what many have faced during the pandemic – how do you survive the surviving.

“We right now have survived what was going on, but we are affected greatly,” Callahan Henry said. “We make different decisions. It’s been hard.”

Callahan Henry also discussed her next book, “Once Upon a Wardrobe.”

Another work of historical fiction, it is set in Worcester, England, in 1950 and explores the question of “where did Narnia come from.” The book is set at the time of the release of Lewis’ novel “The Lion, the Witch and the Wardrobe.”

Callahan Henry said the idea for “Once Upon a Wardrobe” came from the “bread crumbs of ‘Becoming Mrs. Lewis.’”

The book’s central characters are George, a young boy who is ill and needs constant care, and his sister Megs, who is brilliant with numbers and equations and on scholarship at Oxford, where Lewis is a fellow and tutor in English literature at Magdalen College. George, who falls in love with “The Lion, the Witch and the Wardrobe,” asks his sister to ask Lewis where does Narnia come from.

“The gift she thought she was giving to her brother, the story behind Narnia, turns out to be his gift to her instead – hope,” a video preview of the book says.

The library director was also pleased with Thursday’s crowd.

“I was pleased to see all these people come back together in fellowship and happiness, and it was a good sign of hope,” she said.

The fall series will continue Thursday, Sept. 30, with D.B. Tipmore, author of “My Little Town: A Pilgrim’s Portrait of a Uniquely Southern Place.”

For more information on Callahan Henry and her works, visit her website, patticallahanhenry.com.