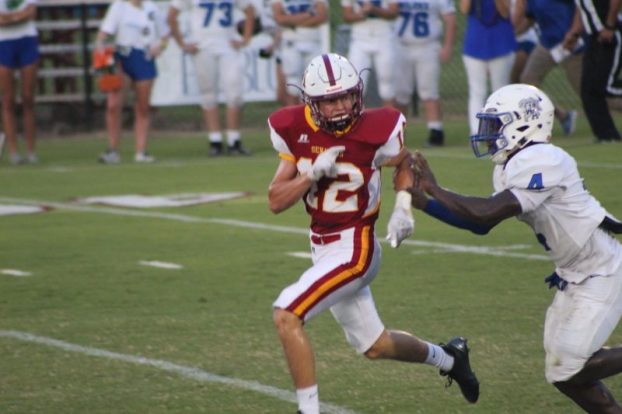 Morgan Academy junior T.B. Clements is used to his knees hurting, but one Sunday during preseason football camp, his whole body seemed to turn on him.

“All of a sudden, every single joint in my body was hurting,” said Clements a first-year starter at wide receiver for the Senators who also gets time at defensive back.

Said his father, Morgan Academy assistant coach Stephen Clements, “He looked like about an 80-year-old man. Missed school for a week. He couldn’t practice. He couldn’t get out of bed.”

What the younger Clements was experiencing was a long-predicted flare-up of a condition he’s battled since the age of 8, when he was diagnosed with Rocky Mountain Spotted Fever after a tick bite.

Stephen Clements said the disease left his son with an arthritic-like condition in his knees, and he’s experienced significant pain in his right knee and a lesser amount in his left ever since. He’s also had four knee operations.

“They kept wanting us to put him on shots, but he said, ‘Daddy, I can deal with knee pain,”’ said Stephen, who along with his wife, April, was afraid of what side effects those shots might cause down the road.

So, T.B. pressed forward despite the knee pain and became a three-sport athlete for the Senators, playing basketball and baseball in addition to football.

He missed all but one football game last season due to knee surgery. He was all set to return this fall, however, until the preseason flare-up.

“I didn’t sleep but four or five hours the first two or three nights because I woke up and was hurting really bad,” he said. “I would get in the bath tub or shower to try to feel better. I wondered if this was going to last forever.”

A doctor prescribed some steroid medications, and by the next Saturday, he was able to attend a fundraising golf tournament for the baseball team.

Stephen believes the steroids had some help.

“We’re real faith oriented,” he said. “I still say Jesus did it.”

T.B. overcame the flare-up in time for the season-opener against Wilcox Academy on Aug. 27. But the knee pain still lingers, and probably always will.

“I’ve had it for so long now … some days it’s fine and doesn’t hurt that bad, and some days I can walk and it feels like it’s going to fall off,” T.B. said. “I’ve had this for eight years, so I’ve kind of prepared myself to deal with it. On a Saturday morning after a game, I know I’m going to have to get out of bed, walk on it, ice it. I know it’s going to be sore.”

Said Stephen, “I am glad that he’s so tough and keeps working his butt off and gives great effort.”

That effort paid off with T.B.’s first career varsity touchdown two weeks ago. He scored on a 50-yard pass from quarterback Andrew Thomas in a 46-22 victory over Wilcox Academy.

“It was good,” T.B. said, looking back on the play. “I’ve been a quarterback my whole life, mostly. This year, I went to receiver and put a lot of work in, and it paid off, I guess.”

Added Stephen, “Just to see him smiling and celebrating with his teammates … after facing that, it was a good feeling.”

T.B. briefly began taking shots for his condition after the flare-up but gave them up after just two. Now, he gets stem cell treatments every two weeks. Doctors take the stem cells from his blood and put them back in his knee.

“He’s a great kid. He’s a really tough kid,” Morgan Academy head coach Danny Raines said. “He works diligently, works hard and gives you everything he has when he’s on the football field. He’s a smart player, too.

“He really loves sports and really puts everything he has into it. It really says a lot about the kid.”