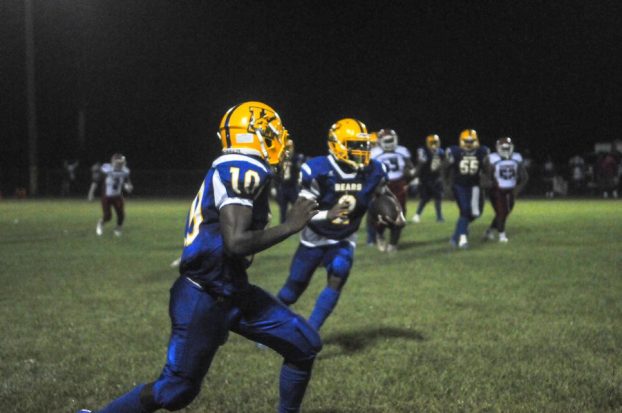 No. 9 Keith seeks another victory over R.C. Hatch

Defensive excellence is a quality Keith coach Anthony Lumpkin wants to see from his football team, and three games into the 2021 season, he’s certainly getting it.

The Bears are coming off a statement win, having defeated defending state champion and Class 1A, Region 3 opponent Linden 43-0 last week.

The shutout not only helped the Bears jump into the state rankings at No. 9, but it also kept Keith (3-0, 1-0) unscored upon this season, with the Bears having outscored their opponents by a combined margin of 130-0.

“This is something that I have been pushing for the last three years,” Lumpkin said. “If we just keep them out of the end zone, that just increases our chances of winning the ballgame, whether it’s a 3-0 ballgame or a 2-0 ballgame, (etc.),”

The coach said keys to his team’s defensive success include “understanding their assignments, knowing where they’re supposed to be at all times on the field, the defensive line controlling their gap, things like that.”

Next up for the Bears is another region test in the form of a visit from R.C. Hatch (1-2, 0-1) on Friday night. The Bobcats are coming off a 28-0 loss to Central Hayneville.

“We can’t take RC Hatch lightly,” he said. “They are a well-coached team and have great athletes. We’ll do our daily routine in preparing for them.”

Looking back on last week’s game, Lumpkin said there was plenty of credit to go around for his squad.

“Although it was a total team effort, Quintavis Woods, Hermanski Todd, Jamal Jones and Marquez Foster were huge in stopping the run game,” Lumpkin said. “Antiwan Thomas (and) Tyler Perry applied pressure with a great pass rush, both having multiple sacks, while Terrell Lumpkin and Jayln Jones contested every single pass the quarterback was able to get off. Terrell had about a 75-yard interception return.

“Again, I am proud of every athlete that wears the Keith uniform because even though our practice was restricted due to the weather, they really got after Linden. Our subs played well. I am very proud of this team of young men.”

Coach Lumpkin said the win didn’t catch him off guard, and he credited the team Linden put on the field a year ago en route to a state title with helping to mold his squad for this season.

“To win the region you have to go through Linden, and that’s our goal,” Lumpkin said. “We’re not surprised by (the win), but at the same time, that’s what we set out to do. Of course, they lost some great players (from 2020). Their players from last year prepared us for this year.”

Even with the personnel losses from a year ago, Lumpkin said of Linden, “We couldn’t take them lightly because they area a pretty good team.”