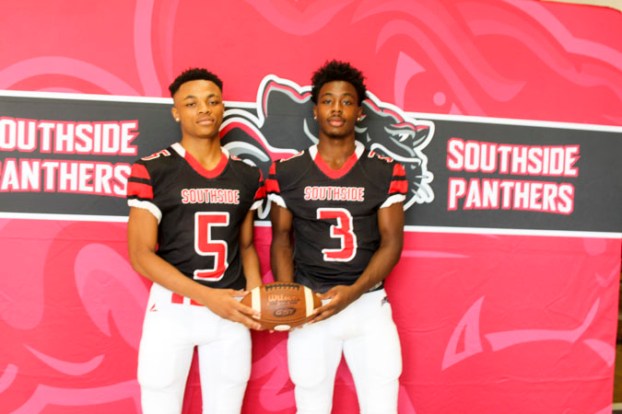 There was no energy shortage on the Southside sideline Friday night.

Instead, the Panthers lit up the night, and the scoreboard, with more than 700 yards of total offense en route to a 56-22 win at Greensboro in Class 3A, Region 3.

“They played very well,” Southside coach Charles Moody said. “They had a whole lot of energy. On defense, they were flying to the ball. On offense, everybody was just making plays. That was huge for us.”

Sam Taylor rushed for a team-leading 187 yards for the Panthers (2-0, 1-0) and scored three touchdowns. Dre Williams added two TDs for Southside, which finished with more than 300 yards rushing.

It was the second straight big game for Thomas, who accounted for more than 400 yards in total offense in a season-opening win over rival Selma.

“He is playing amazing,” Moody said. “He knows what we’re trying to do and he’s able to go out there and complete the game plan.”

Next up for the Panthers is a trip to Montgomery Academy (2-1,1-0) for another region showdown Friday. The Eagles, state semifinalists a year ago, own wins over St. James and Hale County and fell 18-15 to Trinity, which is unbeaten and ranked in the Top 10.

“It’s going to be the biggest challenge we’ve faced all year,” Moody said. “In every game, they try to control the time of possession and control the game. Even in the game they lost, I felt like they controlled the game.”

Montgomery Academy leads the all-time series 5-0 and accepted a 1-0 COVID forfeit from the Panthers a year ago.

Murphy described the Eagles as a wing-T team that runs downhill and is physical.

Establishing the run game will require another strong performance by Southside’s offensive line.

“Those are a great group of guys,” Moody said of his offensive front. “All summer, they worked hard. They get together and know the game plan, the blocking schemes. They’re doing an amazing job right now.”

Keith at R.C. Hatch: Keith picked up a statement win Friday, handing defending state champion Linden a 43-0 setback in 1A, Region 3. For those keeping track, the Bears (3-0, 1-0) have outscored their opponents 130-0.

The Bears will try to keep up their good work when R.C. Hatch visits for another region matchup Friday. R.C. Hatch (1-2, 0-1) is coming off a 26-0 loss to Central Hayneville. The Bobcats defeated Francis Marion 28-26 two weeks ago.

The Trojans fell 53-6 to South Choctaw Academy last week in the first region game of the season for Meadowview Christian. They’ll try to reverse their fortunes when they travel to Sparta Academy (2-0, 1-0) in A, Region 2 on Friday. The Warriors downed Pickens Academy 36-12 last week.

Morgan Academy at Monroe Academy: The offense was the star of the Senators’ Week 1 win over Wilcox Academy, while the defense captured the spotlight in a Week 2 victory over Clark Prep.

Shelby County at Selma: The Saints have reason for optimism following a 12-6 win at Marbury on Friday in Selma’s 5A, Region 3 opener. The victory also broke a two-game losing streak to start 2021.

Selma will attempt to keep building momentum when region play continues Friday as Shelby County pays a visit. The Wildcats (1-1, 1-0) are coming off a 35-22 win over Sipsey Valley.

This will be the third all-time meeting between the schools. Selma won last year 12-10. The other meeting was nearly 100 years ago, a 39-0 victory for Shelby County in 1923.

Wilcox Central at Dallas County: The Hornets will try to pick up their first win of the year Friday when Wilcox Central visits for a 4A, Region 3 game.

Dallas County (0-3, 0-1) lost 48-20 at Bibb County on Friday after previously dropping games to Marbury and Helena.