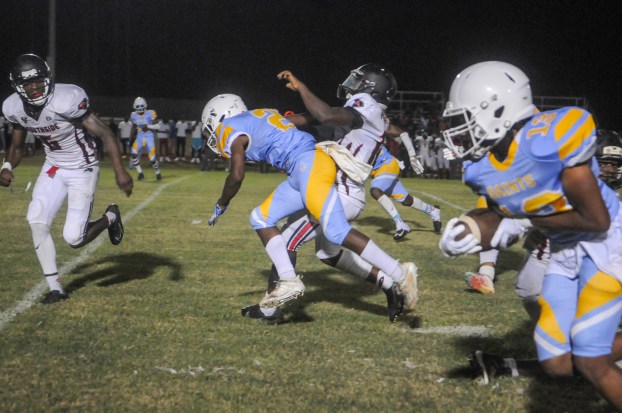 Remnants of Ida create another headache for winless Selma

The Selma football team was idle Monday and Tuesday.

With the state bracing for possible impacts from the remnants of Hurricane Ida, school closed and practices for the first two days of the work week were called off. The coaches met for a film session Sunday, but they won’t get a chance to work with their players until Wednesday.

And there is work to do. The Saints are trying to recover from a pair of losses to start the season heading into Friday’s Class 5A, Region 3 game against host Marbury. It will be the region opener for both squads.

Selma is coming off a 44-16 loss to rival Southside, and Saints coach Will Gandy said this wasn’t the most opportune time to miss practice.

“It’s going to be somewhat of setback,” Gandy said. “We’ve definitely got some things we need to go back to fix and work on. We have 11 guys who are banged up, so this will definitely set us back a little bit due to the injuries we have right now.”

Among the injured is standout wide receiver/defensive back DaKaari Nelson, who has a bone bruise, Gandy said. The coach said Nelson’s status is day-to-day.

Gandy said he hoped the extra time off will give some of the players who aren’t 100 percent the chance to get closer to that level.

“We’re going to have to change it up a little bit,” Gandy said of the team’s practice routine for Wednesday and Thursday. “We can’t get those (lost) days back, so we can’t grind the kids down. The most important thing is to make sure we’re prepared and know what we’re doing.”

Gandy said problems in the secondary were a big part of his team’s struggles against Southside.

“We had a couple of guys go down in the secondary, and that really hurt us,” he said. “Southside came in with a great game plan … We had to put some guys out there that hadn’t played in those positions. It showed that they were young and inexperienced. But injuries come with the territory, and we’ve just got to continue to persevere.”

Gandy said he did see some good things from some of the younger players who had to step in Friday, including sophomore strong safety Seri Perkins and freshman free safety Kendarious White.

The coach also praised the leadership of senior defensive tackle Cornelius Hosea, who had to add offensive line to his duties Friday due to injuries.

On the negative side, Selma can’t afford a repeat of its five turnovers.

“We definitely have to clean up the turnovers,” Gandy said. “I’m going to make some adjustments personally on some things, and we’re definitely going to get it cleaned up.”

“I think Marbury is a good football team,” Gandy said. “I think they’re really good on defense. They play with a lot of passion, are coached well and play hard, and they love to run the football.”

Still, while the game represents a challenge, it’s also an opportunity. The coach said a win Friday would help the Saints erase any bad taste left over from their 0-2 start.

“We started off the same way last year and ended the year on a good note, so if we can get a win Friday night, it will get us going in the direction we need to be,” he said.

Everything is looking up for Morgan Academy, which is coming off a state semifinal appearance in 2020 and opened the 2021 season with a 46-22 win over Wilcox Academy on Friday.

The Senators looked explosive on offense and had a 100-yard rusher (John Allen Ingram) and 100-yard receiver (Rhyne Williams), and QB Andrew Thomas threw for 254 yards.

Clarke Prep’s visit will mark the AAA, Region 2 opener for both squads. The Gators are 0-2 after losses to Jackson Academy, 12-0, and Patrician Academy, 46-7.

The Hornets will be trying for their first win of the year as they begin 4A, Region 3 action. Dallas County is 0-2 after a 34-12 loss at Marbury last week.

Bibb County is 2-0 after victories over Greensboro and Fayette County. The Choctaws lead the all-time series 21-11-3 and won last year’s meeting 69-28.

Undefeated and unscored upon Keith will try to keep its perfect season going when Linden visits for a 1A, Region 3 showdown.

Quarterback Terrell Lumpkin passed for four touchdowns as the Bears defeated Greene County 37-0 in Week 1 after a Week 0 victory over Wilcox Central, 50-0.

Linden dropped its season opener to Pickens County 26-16 on Friday but is coming off a 15-0, state championship campaign last fall.

It’s been a rough start to the 2021 season for the Trojans, who dropped games to Evangel Christian and Lowndes Academy to open the campaign.

The Panthers will attempt to follow up their season-opening win over rival Selma with another at Greensboro in 3A, Region 3.

Greensboro is winless after dropping games to Bibb County, 27-0, and American Christian, 34-20

Southside will be looking for some revenge after falling 32-20 in the 2020 meeting.