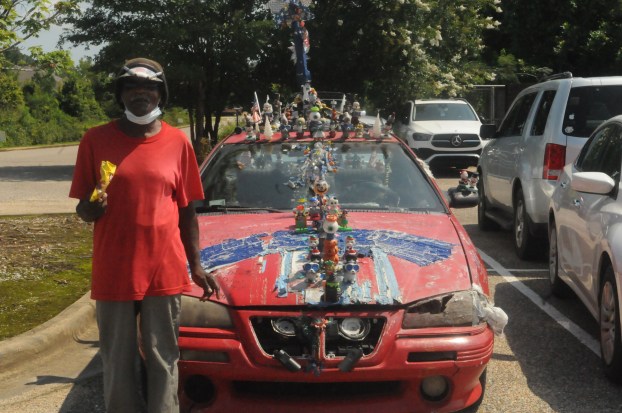 Over the last three years, a Dallas Count resident used his car to showcase his artistic side.

Words written and painted in white about peace and certain personal sayings are spread from the side all the way to the back.

Lights are spread across the windshield and glow in the dark.

The Marion Junction native said the idea began late in 2017 when a vision came to him.

“The Lord has spoken to me is why I put these things on my car,” Craig said.

Craig, 69, said some of the items were purchased by him and others were donated.

“I’ve gotten things from people and I bought the others from places like Dollar General and Wal-Mart,” Craig said.

Craig has lived in Dallas County his entire life. He is a former employee at Wal-Mart.

Selma and Dallas County residents will have a hard time missing Craig. He’s often seen driving across the area, both in daylight and nighttime.

“I’ve been getting great things from the community,” Craig said. “I feel great about getting the positive compliments.”

Craig said he’s waited over 40 years to get recognition.

Craig said his only child, a son lives in Pennsylvania