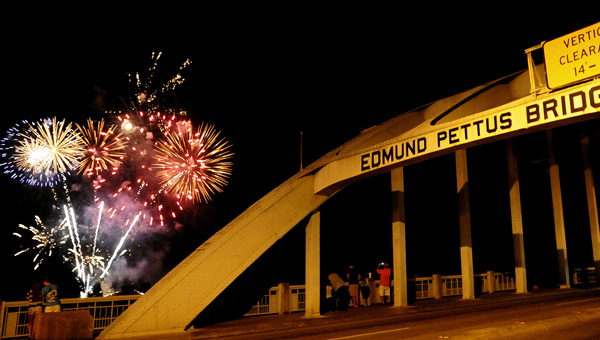 Fireworks explode in the background as spectators line the sidewalks along with Edmund Pettus Bridge last September. Fireworks will again explode over the Alabama River on Labor Day night. (File Photo |Times-Journal)

The City of Selma is set to host a spectacular, event filled, patriotic celebration of America on Sunday, July 4 at Riverfront Park, with all events culminating at dusk in a 15-minute fireworks show above the beautiful Alabama River.

All events are free to the public, and kick off at 4 p.m. with a “Stars and Stripes” honor parade where first responders, emergency personnel, essential workers, teachers and medical professionals will be honored with a parade. More than 500 American Flags have been ordered for children and families and will be handed out prior to the parade, which will be held in the area of Broad Street and Water Ave. The final parade route will be announced later this week.

City of Selma Planning & Development Director Danielle Wooten said this year’s events should hold special meaning for everyone on the city given what the community has dealt with the past year.

“Given that the City of Selma has not hosted a Fourth of July celebration in many years, coupled with quarantine guidelines and social restrictions, we feel that it is important to host an outdoor celebration to bring the community together in a safe and enjoyable way,” Wooten said. “This years event is particularly special as the state reopens and we can celebrate major milestones that were missed due to COVID-19, like Selma’s Bicentennial, which would have been celebrated in 2020. We will also be able to acknowledge and honor our first responders, health heroes, teachers, and all those who provided essential functions to the community during the pandemic.”

In addition to the honor parade, there will be several “villages” set up where residents can find food, browse local art, receive important health information, or share information about their business.

“A special thanks to the community partners that are assisting in organizing the parade, health, art, food, and fun villages, which include the Selma – Dallas County Chamber of Commerce, Arts Revive, Rural Health Medical Program, The Coffee Shoppe, MK87, and the National Guard,” Wooten said.

The City will also use this event to formally open its Splash Pad at Riverfront Park. The ribbon cutting ceremony will be held at 5 p.m., followed by 10-minute small group intervals for children 3-10 years old. There will also be plenty of music, games, and dancing.

At 6 p.m. a bicentennial concert and celebration will feature several regional bands who will be performing a variety of live music at the city celebrates its incorporation on Dec. 4, 1820.

All events will culminate in the “Red, White, & Boom” fireworks show, which will be put on by J&M Displays out of Phoenix City at a cost of $15,000.