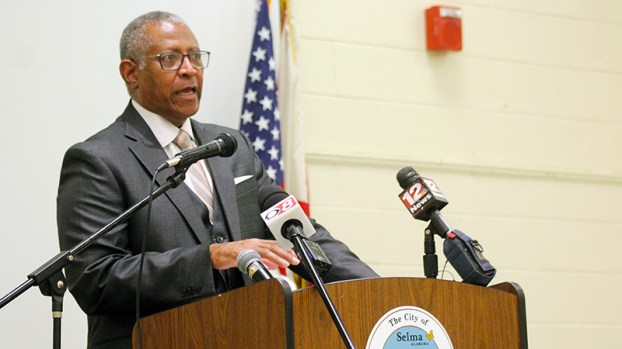 During a last-minute press conference at the Carl C. Morgan Convention Center Thursday morning, Selma Mayor James Perkins Jr. announced that, following a meeting with mayors and health officials later in the day, he would be pushing for the Selma City Council to approve a new ordinance aimed at combating the COVID-19 pandemic.

Perkins praised the effectiveness of the current ordinance, as well as the vaccine rollout in the county, but noted an uptick in cases and the growing prevalence of variants across the country.

Alabama Gov. Kay Ivey issued a new ordinance Wednesday, which urges people to remain distanced as the statewide mask mandate expires Friday, and Perkins ordinance will be a local supplement to that.

Perkins did not provide details about the planned ordinance, saying only that the guidance he receives during a meeting of the Alabama Conference of Black Mayors in Tuskegee would guide his decision.

The new ordinance would have a sunset date of May 14.

Over the last two weeks, 33 new cases of the disease have been identified in Dallas County.

“We’re beginning to see a trend,” Perkins said. “These are decisions that have life and death implications. COVID is real, it’s not gone anywhere.”

Perkins said the urge to implement a new local ordinance stems from the fact that the expiration of the statewide mask mandate puts the responsibility of public safety on citizens, as well as city and county officials, and he is looking to “strike a balance” between the state ordinance and local needs to continue fighting the virus.

“We’re not out of the woods yet,” Perkins said.