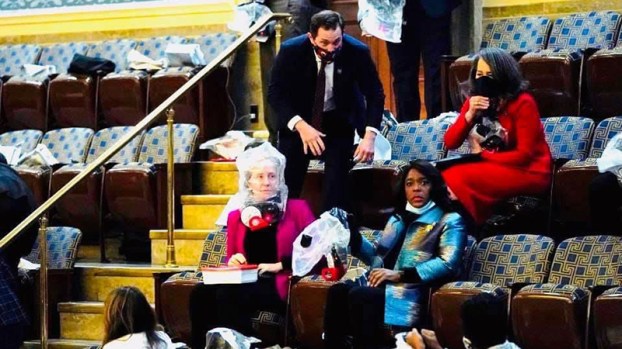 Wednesday marked a landmark day in the history of the nation, as a U.S. Senate runoff in Georgia resulted in two incumbent Republicans being ousted and control of the chamber shifting to Democrats, while in Washington the certification of the Electoral College votes making official the election of Joe Biden as the next president were interrupted when a mob breeched police lines and entered the U.S. Capitol, forcing buildings to be locked down and lawmakers to shelter in place.

Among those on hand for the chaos Wednesday was U.S. Rep. Terri Sewell, D-AL, who was in the House gallery watching the certification proceedings when the breech occurred.

“As I was lying on the floor of the U.S. House of Representative huddled with other members of Congress, struggling to fit on a tear gas mask and fearing the thunderous sound of impending violence, I trembled and wept not only for our safety but for the devastating threat to our democracy,” Sewell said in a social media post Wednesday.

The unrest coincided with an attempt by Republicans, including U.S. Sen. Tommy Tuberville, R-AL, and all of Alabama’s Republican House members – Mo Brooks, Robert Aderholt, Mike Rogers, Barry Moore and Jerry Carl – to object to certain states’ results over unfounded allegations of fraud and wrongdoing related to the November election.

Though delayed, Biden’s victory was eventually confirmed, but Sewell had harsh words for Trump and the Republicans she said incited Wednesday’s violence by objecting the results of a “lawful election.”

“Today marks a dark day in America’s history,” Sewell said in a statement Wednesday. “The words of the President of the United States matter. Donald Trump’s serial lies and inflammatory rhetoric incited the armed insurgents who stormed the U.S. Capitol today. He encouraged this attempted coup and the violence that ensued is a result of his recklessness. After four years of his consistent efforts to discredit our democratic institutions, President Trump and his allies have brought us to this sad place in our nation’s history.”

“Our democracy is under unprecedented assault,” Sewell continued. “These domestic terrorists do not represent America, our democracy, or the values of our nation. As elected officials, we must set aside our political differences and work together for the common good, remembering that our loyalty is not to a political party or to an individual but to the Constitution and the oath that we swore to protect and defend our democracy.”

The rest of Alabama’s House delegation expressed similar views, though Republicans refrained from classifying the Capitol attackers as “domestic terrorists.”

Brooks, however, as has been his custom, doubled down by making unsubstantiated claims that leftist protesters were at the center of Wednesday’s unrest.

“Please, don’t be like #FakeNewsMedia, don’t rush to judgment on assault on Capitol,” Brooks said in a tweet. “Wait for investigation. All may not be (and likely is not) what appears. Evidence growing that fascist ANTIFA orchestrated Capitol attack with clever mob control tactics.”

Aderholt joined Brooks in contesting election results, but took a gentler tone in remarks related to the Capitol crisis.

“God has brought this nation through many dark days over the past 240 plus years,” Aderholt tweeted. “We have always been able to settle our disputes peaceably. I believe He will continue to guide & protect this nation. However, as a nation we need to see His guidance in peace. He is in full control!”

Palmer, who likewise voiced support for an objection to election results, condemned Wednesday’s mob scene as “far from a peaceful assembly.”

“As a strong defender of the First Amendment, I support the right to peacefully assemble,” Palmer said in a statement issued Thursday. “But what we witnessed on the Capitol grounds yesterday was far from a peaceful assembly, and the nation should have only one response to those activities. They must be strongly condemned.”

“The senseless actions of a few led to the unnecessary loss of life and multiple injuries,” Palmer continued. “I commend the Capitol police for restoring peace and for their resolute and courageous efforts to protect the members of Congress and their staff, and everyone else who serves in the Capitol complex. Violence and destruction are not the answer to our problems, no matter how frustrated we become. We have a nation of laws, not a nation of anarchy. The activities yesterday distort what our nation represents, and those engaging in them prove they have no love for country or respect for the rule of law.”

“There is no place for political violence in America,” Rogers, another opponent to Electoral College results, said on Twitter. “Whether it is from the left or the right, it is abhorrent and wrong.  We are a nation built on law and order and must remain so.”

Moore, who took to Twitter ahead of Wednesday’s certification to parrot false accusations regarding Georgia’s election results, likewise condemned the demonstrators’ actions.

“Lawlessness and anarchy are never the answer,” Moore tweeted. “We are – and always will be – a nation of law and order. While I support Americans’ 1st Amendment rights, I strongly condemn any and all violence & fully support our brave Capitol Police and [law enforcement officers] LEOs.”

“Americans have a right to protest, but violence is never the answer,” Carl said in a tweet. “I’m praying for the safety of my colleagues on both sides of the aisle and the law enforcement protecting us.”

As chaos was unfolding in Washington, the results of Georgia’s runoff election became final, with Democratic nominees Rev. Raphael Warnock and Jon Ossoff besting incumbent Republicans David Perdue and Kelly Loeffler, handing control of the Senate back to Democrats.

“What an incredible victory,” Sewell said in a statement Wednesday night. “Georgians reminded us how much power each and every American holds to make change in our nation. The Reverend Raphael Warnock, who preaches from Martin Luther King, Jr.’s pulpit at Ebenezer Baptist Church, will be the first Black Senator from the State of Georgia. And Jon Ossoff, a son of Georgia counseled by the great Congressman John Lewis, will be the youngest U.S. Senator to take office since President-Elect Joe Biden.”

“During his last visit to Selma on March 8, 2020 to commemorate the 55th Anniversary of the March from Selma to Montgomery, John Lewis challenged Americans to ‘vote like never before,’” Sewell continued. “Now, our top priority in Congress must be to honor his legacy and all that American voters have fought for by passing the John Robert Lewis Voting Rights Act into law. What a befitting celebration of John’s legacy and tribute to the people of Georgia who showed us the real power of the vote.”