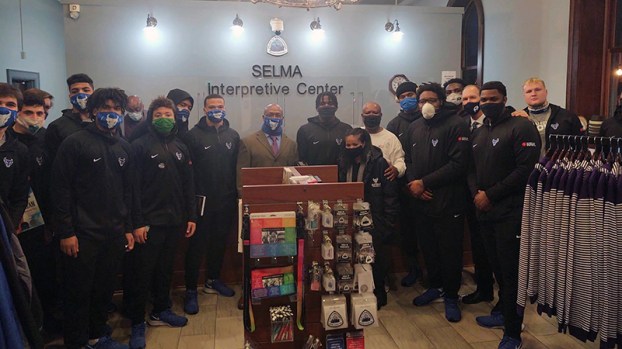 Ahead of their 17-10 Christmas Day victory over Marshall in the Camellia Bowl in Montgomery, the players of the University of Buffalo football team stopped in the Queen City to take in the history.

The team arrived in Selma two days before the contest in Montgomery along with icy and rainy weather, but local tour guide and radio personality Terry Chestnut, who took on the task of educating the visitors during their visit, said the players were not phased by the inhospitable weather.

“They didn’t care,” Chestnut said. “They walked across that bridge in the rain.”

Chestnut said he was contacted by Selma-Dallas County Chamber of Commerce Executive Director Sheryl Smedley, who said she had a large group coming into town and wanted him to act as their guide.

“I love doing it,” Chestnut said. “I love meeting people.”

After the team crossed the Edmund Pettus Bridge, Chestnut reached out to Selma Interpretive Center Director Kenneth Williams, telling him that seven buses full of history-hungry football players were in town and asking him to stay open so they could have a tour – Williams replied that he would be honored.

“We couldn’t get everybody in there at once,” Chestnut said. “I went through my presentation four or five times and it went very well. The Interpretive Center made money, everybody was happy and I’m still getting calls.”

Chestnut said the players were “blown away” by their first visit to Selma, where they learned the history of Edmund Pettus and Chestnut’s iconic father, J.L. Chestnut, and took an in-depth look at the violence that defined Bloody Sunday.

“That really stuck with them,” Chestnut said.

For his part, Chestnut said it’s important for people, especially those from beyond the South, to visit Selma and learn the local history.

“They need to know and understand their history,” Chestnut said. “You need to know where you are in life and where you’ve been and what it took to get where we are, they need to know that so they have a sense of self-pride. They enjoy the rights they have today because of our ancestors’ efforts. They put their lives on the line.”

“I immensely enjoyed it and I always do when I get to do it, especially with young people,” Chestnut continued. “Selma played a major role in American history, not just for Blacks but for whites as well.”

That element of racial harmony – one Chestnut focuses intently on in his tours as, to his knowledge, he is the only local tour guide who educates tourists on both Black and white local history – is one of the most important lessons to be learned, Chestnut said.

“If we would just unite, come together, this world would be an awesome place,” Chestnut said.