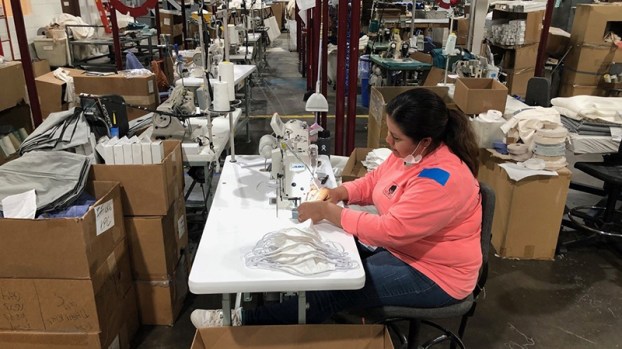 On Monday, Alabama Gov. Kay Ivey announced that HomTex, a company founded in 1987 as a contract manufacturer of sheeting, received more than $10.5 million in federal Coronavirus Aid, Relief and Economic Security (CARES) Act funds to expand its operations into Selma to craft personal protective equipment (PPE) needed to combat the ongoing COVID-19 pandemic.

The family-owned, minority-owned business, headquartered in Cullman County, will bring at least 300 new jobs to the region.

“HomTex has made Alabama proud by stepping up during the COVID-19 pandemic to shift their production to create critical PPE supplies,” Ivey said in a press release. “Their ability to be flexible in order to remain operational is the exact intent of the CARES Act funds. I appreciate their commitment to the economy and Alabama workers by providing needed jobs in Dallas County and thank HomTex for being a great corporate partner with the state of Alabama.”

According to HomTex President and Chief Financial Officer (CFO) Jeremy Wootten, the company is eying a property in Selma, which will require “major remodeling” work, including new lighting, walls, a sprinkler and HVAC system and more.

Wootten said the Selma property is still being negotiated – he is traveling to the Queen City Tuesday to meet with Selma-Dallas County Economic Development Authority (EDA) Director Wayne Vardaman and others –  so details are limited, but added that he hopes to see it operational by April.

According to the release, the HomTex deal comes out of a partnership between the company and the state, as well as Wallace Community College-Selma (WCCS), and will see the manufacturer establish an operation to produce general purpose and U.S. Food and Drug Administration (FDA)-approved surgical and N95 masks.

WCCS will offer an apprenticeship program to allow students to help make masks, which will be distributed across the region and beyond.

“The coronavirus pandemic has clearly demonstrated that our country needs a dependable domestic production pipeline for PPE and Cullman-based HomTex has stepped up to fill a portion of that critical need,” said Alabama Department of Commerce Secretary Greg Canfield. “With its expansion in Cullman and its new growth plans in Selma, HomTex is helping to make Alabama a U.S. hub for the production of PPE. In addition, the company’s new Selma operation will provide an economic boost for the Black Belt region and advance our strategic goal of providing opportunities in Alabama’s rural communities.”

The company secured a contract this fall to provide protective face masks to the federal agency responsible for the operation of the U.S. Capitol Complex in Washington, D.C.

“We are very honored to be the recipient of COVID-19 Relief Funds from the state of Alabama,” Wootten said in the release. “This second operation will make HomTex one of the largest face masks manufacturers in the USA and we are proud to be manufacturing these products in Cullman and Selma. We very much appreciate the support from Governor Ivey, the State Senators and everyone who made the factory in Selma a reality.”

“I must first thank God for these 320 new jobs in the Black Belt of Alabama,” Sanders-Fortier said in the release. I am so appreciative of Governor Ivey’s decision and work to make this happen for the people of the Black Belt. It is a major step in our goal to help people help themselves out of poverty in…my district. I am humbled by the bi-partisan cooperation that made this all possible. This is how we build the Beloved Community. I believe this is a first step that can breathe new hope into the people of the Black Belt for much more economic development to come.”