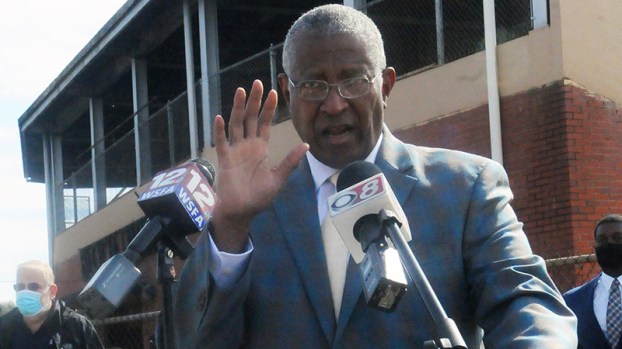 The 11 a.m. press conference began with confusion as a long line of cars jockeyed to get into the parking lot at Bloch Park – drivers said they were turning out for a food giveaway sponsored by the Dallas County Emergency Management Agency (EMA), but no such giveaway took place.

The Dallas County EMA could not be reached for comment.

Perkins called a long parade of local officials to the podium during the press conference, beginning with City of Selma Public Works Department Director Steven Hendrieth for an update on hurricane recovery efforts.

“We’ve done a lot and there’s a long way to go,” Hendrieth said, noting that crews have been clearing debris nearly every day over the last week.

Perkins noted that the emergency declaration issued by Alabama Gov. Kay Ivey in response to the hurricane covered Selma, meaning that the city did not have to approve an additional declaration for local recovery efforts.

Alabama Power’s Aubrey Carter reported that about 98 percent of local customers were impacted by Zeta, but the company has been able to restore power to most in the region – those still without power have likely sustained structure damage that makes power restoration impossible.

“It has been a community effort,” Carter said of the ongoing work.

Interim City of Selma Public Buildings Department Director Stephanie Minnefield reported that a plan is being developed for COVID-19 reporting, screening and more while City of Selma Planning and Development Department Director Henry Thompson reported that the city is in the final steps of collecting documents to be sent to the Federal Emergency Management Agency (FEMA) for recovery funds.

“It’s important to get the paperwork together so we can get the money,” Perkins said.

Selma City Attorney Major Madison reported that the outgoing council appropriated funds for hurricane cleanup efforts but did not sign or execute any contracts for the work.

As such, Perkins noted, some contractors may be working in the city based on “verbal agreements” which have not, and likely will not, be approved as the Public Works Department is doing all cleanup work in the city.

Perkins also stated that the city’s budget, which he said was altered by the previous council on the day of transition, would be taken up in the coming weeks.

“We expected it to be a big job,” Perkins said. “It’s turned out to be a little bigger.”

Part of the upcoming budget process, Perkins said elsewhere, will be looking for funds to increase staffing levels in the city’s Public Works and Cemeteries departments.

Perkins also announced that the city was approved for a grant through the U.S. Department of Transportation’s (USDOT) Transportation Alternatives Program (TAP).

Perkins read a letter from Ivey announcing the award, which comes out to $800,000 – $570,000 will be provided through the grant, with the city on the hook for the remaining $230,000 – to be used to repair sidewalks along and off of Marie Foster Street.

Perkins applauded former Selma Mayor Darrio Melton for the grant, which was applied for during his administration.