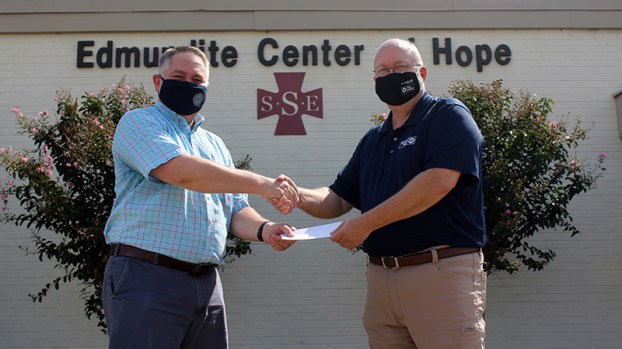 On Monday, United Way of Selma and Dallas County Director Jeff Cothran presented a $5,000 check to Edmundite Missions CEO and President Chad McEachern, which will provide more than 3,000 “grab and go” meals for needy people across the area.

“We are so thankful to our individual donors across the country who have continued supporting us during these challenging times,” McEachern said in a press release. “We are also so grateful for the support of faithful partners like the United Way.”

The local United Way gives yearly contributions to the Missions, specifically its Bosco Nutrition Center, but Cothran noted that the COVID-19 pandemic, which touched down in Alabama in mid-March, inspired the group to step up its giving.

Cothran said the United Way board immediately set aside funds for community relief, which would go toward supporting organizations lending a hand to those reeling from the impact of the virus, and began handing out funds.

Along with the Edmundite Missions, Cothran said the group handed $2,000 to help a community organization in Orrville keep the lights on and has donated $5,000 to the Selma Area Food Bank (SAFB).

“We’ve been blessed to get this money, but we’re really blessed to have organizations in our community that can use it,” Cothran said, noting that so far the relief fund has raised about $70,000.

So far this year, the Edmundite Missions has received a total of $10,000 from the local arm of the United Way.

“Their support has been vital during this time and we look forward to continuing a long-standing partnership that has helped so many in Selma and Dallas County,” McEachern said.

For its part, the Edmundite Missions transitioned its operations during the first days of the pandemic, adopting “grab and go” food service to distribute the more-than-1,000 meals served each day, but that transition came at a cost.

“While the Missions has been evolving to meet the needs of those in poverty in the Black Belt for over 80 years, this particular challenge has increased costs,” a statement from the Missions said. “The cost per meal has risen 34 percent since the beginning of ‘grab and go’ service.”

Despite that fact, people’s needs have continued to grow in the region.

“COVID-19 has placed an unwanted pause to many aspects of our daily lives, but there has been no pause in the needs of those in poverty in the Black Belt,” McEachern said. “In fact, those needs have grown.”

Cothran agreed, noting that giving levels in the area have been down for the past couple of years, despite the fact that the number of people in need has only grown, and urged people to take part in the United Way of Selma and Dallas County’s fall fundraising campaign, which kicks off Thursday, Oct. 1.