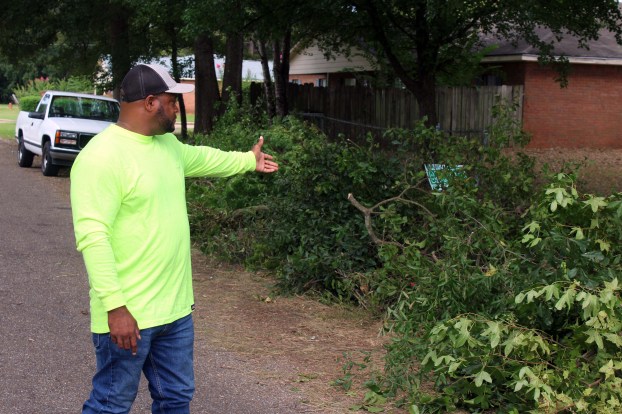 LaMarkus Snow is wondering why city workers aren’t picking up piles of limbs and trash cleared off and picked up by he and his crew, Snow’s Cleaning Service.

Roughly three weeks ago, Snow said that he and his crew had completed a big job on Washington Street, behind Payne Elementary School, leaving large piles of cleared tree limbs at the curb to be collected by city workers.

Snow said over the past three weeks he has personally witnessed city workers drive right by the piles of limbs he had cleared from the area with no indication of stopping.

Snow said he had heard rumors circulating that Selma Mayor Darrio Melton had ordered city workers not to pick up any piles of limbs or trash collected by Snow and his crew.

After watching several city workers drive by piles of limbs he and his crew had collected, Snow said he finally flagged down five separate city workers to investigate the alleged rumors and that each of them said they had been instructed by City of Selma Public Works Director Steven Hendricks to not to pick up any piles collected by Snow’s Cleaning Service.

Snow said that Hendricks said he was instructed by Melton to inform city workers that anyone who picks up debris collected by Snow will be fired.

“These are people that are afraid they are going to lose their jobs,” said Snow. “Therefore, they are not going to pick [the piles] up.”

Snow said he was baffled that Melton would send such an order down to city workers, especially since much of the work he has done for free as an act of community service and that months ago, Melton commended Snow for his work cutting grass and clearing overgrown brush throughout the Queen City.

“Over the past few years, regression in the City of Selma has lingered due to the lack of staffing,” Melton wrote on his Facebook page early in July. “Yet, there is a glimmer of hope when local residents demonstrate great civility by taking up measures to assist in the cleaning and grass cutting in our City. I am grateful for the civility that LaMarkus Snow has demonstrated by relentlessly restoring the vibrancy of public and private cemeteries in the City.”

“I think the mayor is doing this to make [Selma City] Council members look bad, and to make the city look bad,” said Snow.

Snow opined that he thinks the Mayor would offer resources to help remove the cleared brush rather than hinder his service efforts.