Local businesses partner to get students laptops for virtual… 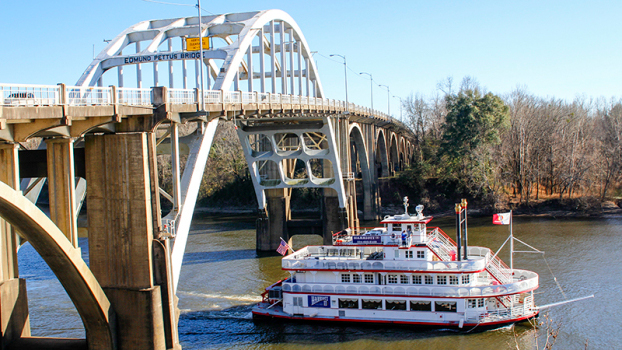 The Alabama River flows some 318 miles through the richest agricultural and timber districts in the state, and has long been known as a sportsman’s paradise where boaters and anglers alike spend long lazy summer days enjoying its smooth waters and scenic bluffs.

But the river’s true recreational safety and capacity is being hindered by a lack of funding from the federal government for dredging, and apathy among the state’s congressional delegation when it comes to keeping the river navigable.

The Alabama, which is formed by the Tallapoosa and Coosa Rivers just north of Montgomery and ultimately discharges into Mobile Bay, hasn’t been dredged in 10 years, with the 75-mile stretch from Claiborne Lock and Dam to the Tombigbee River littered with sandbars, floating debris, old buoys and wood lodged near the channel, making it nearly unnavigable and dangerous for recreational boaters.

“It is not just my campaign, it is the outcry from the recreational boaters and stakeholders from Montgomery to Mobile,’’ Lawler said. “The Corps of Engineers does not consider recreational impact along the river. The recreational fisherman has no voice to get any work done.”

Lawler said river conditions have gotten worse over the years.

“The maintenance neglect began 10 years ago when the commercial barge traffic went away,” Lawler said. “The funding to maintain the 9-foot navigation channel was limited because it was classified as a “low use waterway.

“This was measured by the 3 locks (Jones Bluff, Millers Ferry & Claiborne) activity. The locks are seldom used because of no commercial traffic, thus the classification “low use waterway.” I have challenged that classification because on William “Bill” Dannelly Reservoir the summer of 2020 saw the most recreational boat traffic ever.”

“I became aware of the siltation issues/challenges up and down the Alabama River particularly in Camden, Selma and in Monroeville, through the Coosa-Alabama’s board members,” Hardwich said. “When the organization was first formed, its mission was to improve the lives of the citizens living along the Coosa-Alabama river basin. Today, the mission remains the same. Improving the lives of our citizens located along the river basin is just as important and recreation, tourism and economic development is key to this mission. Recreation has picked up quite a bit on the river, especially since the pandemic. You see so many more recreational anglers, boaters and kayakers throughout all of our waterways.”

Hardwich said that CARIA has contacted both the U.S. Army Corp of Engineers and congressional leaders.

“I reached out to the US Army Corps of expressing our concerns about the siltation affecting the ability to navigate and some of the dangerous conditions,” Hardwich said. “We have also contacted our congressional delegation to make them aware of the issues and the funding issues the Corps has in order to dredge and help recreation on the Alabama River.”

Hardwich, a Wetumpka native, said that the U.S. Army Corps of Engineers plans to help with dredging, and estimates it will cost $5 million.

“We’ve got legitimate concerns and the Corps has told us they’re willing to work with us to help,” Hardwich said. “The overall issue for our river and the Corps’ ability to help is funding. Our association is advocating at the federal level to get funding for the Corps to help us with the siltation and navigation issues.

“After we conquer that, we’ll want to look at other issues dealing with fishing and recreation. They were able to tell us the biggest issues and the actual costs to dredge the problems areas. Coosa-Alabama is focusing on helping the Corps receive funds for recreational dredging.”

Cesar Yabor, who handles Public Affairs and Media Relations for the U.S. Army Corps of Engineers Mobile District, said commercial freight tonnage plays a big role in the river not being dredged.

“Funding for the maintenance of the navigation features of the river system are largely driven by the freight tonnage moved on the Waterway which is not favorable in the Alabama’s case,” Yabor said. “Nevertheless, it is included in the District’s funding request sent through our higher headquarters, where it competes with other projects across the nation for an allocation.”

Selma – Dallas County Economic Development Authority (EDA) Director Wayne Vardaman, who has been a staunch advocate in the past for dredging the Alabama, said lack of commerce along the river is what makes it nearly impossible to get federal funding for the river’s upkeep. No freight equals no dredging, but it has to be dredged in order to increase the freight tonnage.

“When you don’t have the business, it’s hard to make the case,” Vardaman said. “It cost $5 million for the last dredging. It’s a tough issue.”

Lawler has a link for citizens to download letters to politicians for dredging on his website, gettingoutdoorsradio.com. Lawler has written a letter to two Senators, Richard Shelby-R-AL and Lamar Alexander, R-TN, to get funding for dredging.  Shelby and Alexander are members of the Senate’s Appropriations committee. The letters are available on Lawler’s Facebook page and he encourages those who have an interest in the Alabama River to download them and mail them to Shelby and Alexander.

“The Alabama River Lakes Multi-purpose project (ARL) in the Mobile District, USACE, largely within the Black Belt Region of our state remains largely underserved, the bountiful natural resources are a primary industry for the region; yet the failure to maintain the waterways for recreation are hindering tourism,” the letter states.

Hardwich praised Lawler for producing the letters and said those who are interested in helping move the dredging project along need to mail the letters by the end of September.

“The grassroots are extremely important,” Hardwich said. “Grassroots is always important when advocating for an issue, because our Congressional leaders want to hear from their people back home and people that elect them. Sending letters, contacting your congressmen, and when the state legislature is in session, contact them to let them know. This issue is very important. If they don’t know, how can they help you? The month of September, it’s time to get everything done. By the end of September, it’s too late.”

Hardwich and Yabor both say Congress and the Senate hold the key to the Alabama River being dredged. Hardwich said the process takes a while because Congress has to appropriate funds.

“It takes time to advocate for any position and even more time when you are asking for additional funding,” Hardwich said. “It’s hard to say right now as the House has passed their appropriations bills. However the Senate has not. Due to the upcoming election, Congress’ focus has changed to continuing to fund the federal government and focus on the elections.”

“Congress is the final decision maker on how much will be allotted for operations and maintenance each year for the U.S. Army Corps of Engineers through the Energy and Water Appropriations,” Yabor said. “For Fiscal Year 2021 the President’s Budget has requested approximately $13 million in support for the river system which will largely be committed to the operation and maintenance of the two hydropower plants on the river: Millers Ferry and Jones Bluff, and the recreational features such as campgrounds, parks, and boat ramps.”

Editor’s note: The Selma Times-Journal contacted both the offices of Sen. Shelby and Rep. Terri Sewell, but repeated calls for comment on this story were not returned.