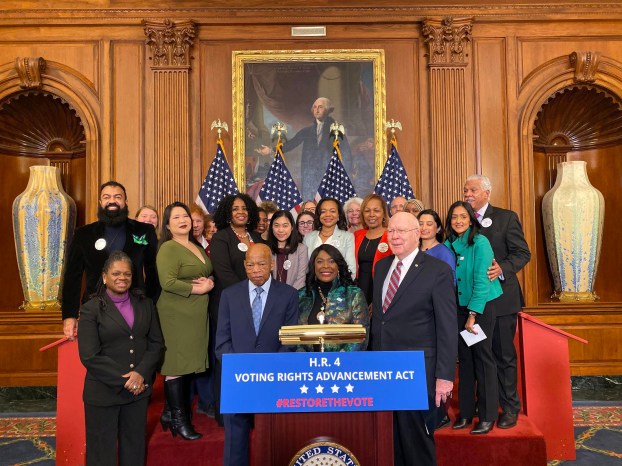 Last week, The Leadership Conference on Civil and Human Rights, alongside more than 150 other civil rights organizations, called on members of Congress to swiftly pass the Voting Rights Advancement Act, H.R. 4, recently reintroduced as the John Lewis Voting Rights Advancement Act, as well as the HEROES Act, H.R. 6800, which contains essential funding for states to hold safe elections during the pandemic.

These legislative measures would both protect the integrity of the November election and counter the historical disenfranchisement of communities of color and disabled voters across the country.

“To honor the legacy of John Lewis, the Senate must promptly conduct hearings on the Voting Rights Advancement Act and build an appropriate evidentiary record to buttress this legislation, and then bring it up for a vote. The House has done its part – conducting extensive hearings last year and amassing significant evidence of ongoing voter discrimination in America – and now it is time for the Senate to follow suit,” the groups wrote. “In addition, the Senate must honor the memory of John Lewis by passing the election provisions of the HEROES Act. This legislation would provide necessary funding of $3.6 billion to states for election assistance as well as vital voting rights reforms that were based on Representative Lewis’s Voter Empowerment Act – such as no-excuse absentee ballots, at least 15 days of in-person early voting, accessible online and same-day voter registration, and equal access for voters with disabilities – that are essential to help this nation safeguard the November 2020 election. Once again, the House has done its part – passing the HEROES Act over two months ago – and now the Senate must act.”

U.S. Rep. Terri Sewell, D-AL, sponsored the original Voting Rights Advancement Act in December, where it cleared the House of Representatives by a margin of 228-187 and has awaited Senate approval since.

The bill was drafted to address the U.S. Supreme Court’s Shelby County v. Holder decision, which gutted a key provision of the landmark Voting Rights Act of 1965 called “preclearance.”

The 1965 bill required locales with a history of racial discrimination to justify any changes made to voting laws to either the U.S. Justice Department or the D.C. federal court and established a formula by which such locales could be identified.

The Shelby County v. Holder decision nullified that formula and required Congress to adopt a new one.

The John Lewis Voting Rights Advancement Act restores the “preclearance” requirement by establishing an all new formula by which historically discriminatory locations can be identified and required to clear any voting law changes ahead of time.

“Voting is personal to me, not only because I represent America’s Civil Rights District but because it was on the streets of my hometown, Selma, Alabama, that foot soldiers shed their blood on the Edmund Pettus Bridge so that all Americans – regardless of race – could vote,” Said Sewell in December upon the passage of the Bill.