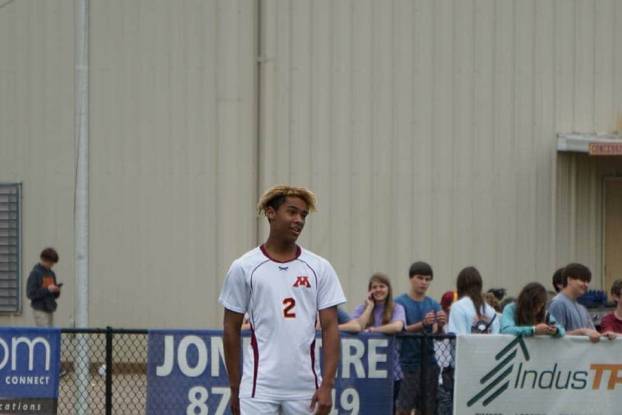 The Morgan Academy community is mourning the loss of one of its all-time favorite student-athletes.

Several Morgan Academy Administrators and students shared their memories of Russell on Social Media. Russell graduated from Morgan Academy in 2016 and was attending Auburn University.

“We are heartbroken by the passing of Stacy Russell,” Oaks said. “One of my favorite memories of Stacy was telling him that he got accepted to Auburn University. Stacy hugged me and he cried. He was super excited.”

Morgan Academy soccer coach Jay Minter said Russell was a stellar student-athlete on and off the field.

“His athletic abilities pale against who he was as a person,” Minter said. “That being said, he grew into being a great soccer player by his senior year.  A very fast center back who developed into a real shut down defender.

“We were able to pull our back line all the way up to midfield when we were attacking and just dare other teams to try to play long passes into the space behind them.  We were only able to do that because I knew Stacy could track down anything past him and thwart the counter attack.”

At Auburn, Russell continued to excel. Russell was a SOS Orientation Leader in 2017-18 and a Camp War Eagle Counselor in 2019.

Mary Stewart, Russell’s classmate at Morgan Academy and 2019 homecoming queen at Auburn,  said she will always remember his kindness and integrity.

“It’s hard to put into words how special Stacy was and what he meant to me and so many others,” Stewart said.  “He was the most caring friend I had. He loved others unconditionally and accepted everyone with open arms. Stacy taught me to be okay with being 100 percent myself, regardless of what other people thought. He exuded joy. I have never met anyone whose smile was quite as contagious as his. He showed us all what it truly meant to enjoy the fullness of life and never let a moment go to waste.”

“His impact reaches far beyond myself, our class, Selma, and even the people he met at Auburn,” Stewart said. “Stacy will never know the impact he had during his short time with us. He truly was the best of us and it’s heartbreaking to see a person filled with so much light and love taken so soon.

“I know my life won’t be the same without him here but I’m grateful to have been lucky enough to call him a friend, more like family. I know for myself and my class, he will be deeply missed, but we all will carry with us the memories we made and will try to live up to his legacy everyday. We are so saddened for his family and will be sending prayers and thoughts to them. We know they’re heartbroken during this time. To Stacy I would say I love you and thank you for making me the woman I am today.”

“Stacy was a special human,” Shannon Stewart said. “Stacy brightened every life he touched. His smile, his hugs, his friendship is his legacy. We all loved Stacy.”