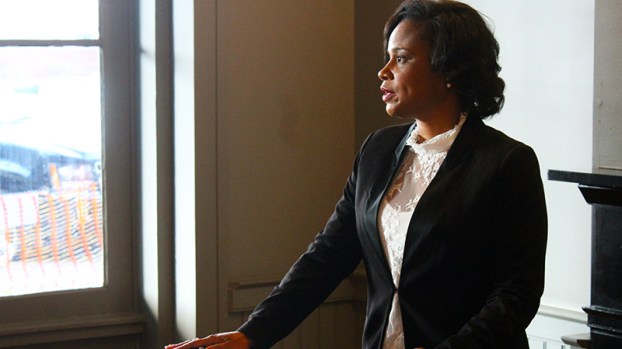 The St. James Hotel hosted a campaign event for Selma mayoral candidate Miah Jackson, who currently serves as Ward 3 councilwoman on the Selma City Council, on Thursday evening inside the newly-renovated hotel lobby.

The inside of the hotel was well-lit and showed little evidence of ongoing construction, aside from a few missing sconces – the polished wood of the bar shone and the new staircase was in its place, while the brick floor of the courtyard stretched down corridors not quite finished.

The event, an invitation-only affair urging invitees to “support Miah Jackson for mayor,” drew a crowd of Jackson supporters eager to hear Jackson’s plans for the City of Selma if elected mayor during the Municipal Election on August 23.

Jim Lewis, CEO of Rhaglan Hospitality, the company responsible for the purchase and renovation of the historic hotel, introduced Jackson before she delivered a speech to those gathered in the hotel’s lobby

After offering thanks to Lewis and the rest of the St. James team, Jackson hailed the hotel as a case study in how the city can attract new business partners.

“The St. James stands as an example of how the city can use incentives and abatements to assist in the attraction, expansion and retention of those willing to invest in Selma,” Jackson said. “I’m not going to sugarcoat it, the past three-almost-four years have been tough for the Queen City, she is battered and bruised but she still stands and, with the right priorities, a strong team, hard work and even harder decisions, we can secure her future.”

With that, Jackson laid out her plans for the city if she’s elected in office, starting first with an issue that has been a focus of her time on the council: fixing the city’s “budget crisis by moving towards stability, accountability and transparency.”

Further, Jackson intimated her intention to “strive for a more just, fair, safe and inclusive city” for all residents and develop a “community culture that supports local businesses, is business-friendly and one that thrives by working together.”

Beyond that, Jackson hopes to reduce violent crime in the city by “cleaning up” the city’s beleaguered Municipal Court, adding new officers to the understaffed Selma Police Department (SPD), enforcing ordinances and creating opportunities for area children, as well as balance the city’s budget and restore essential services and seek grants to speed up the city’s “recovery process, offset infrastructure and equipment needs…finish redevelopment of the riverfront and riverfront neighborhoods and downtown businesses.”

“It’s the mayor’s job to not only run day-to-day operations, but to serve as the heart of the city and build morale,” Jackson said. “I have the heart, the experience and real-time knowledge of our problems and needs.”

“We all know this election is not the time for nostalgia of the past, nor is it time for novelty or the unknown,” Jackson continued, taking a dig at her opponents. “On August 25, let’s move Selma forward…because I am Selma, you are Selma and we are Selma. United we can secure our future.”