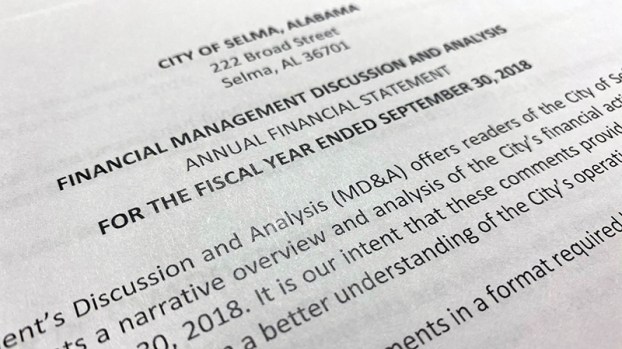 Much like the report from the Alabama Department of Examiners of Public Accounts handed down to the city earlier this year, the recent independent audit from Carr, Riggs and Ingram (CRI) found widespread issues within the city’s Municipal Court, including missing records, unreconciled accounts and unsigned traffic tickets.

According to the report, the Municipal Court was “unable to locate original documentation related to some of the court transactions” reviewed during the audit.

The report further notes that much of the missing documentation, often related to court cases and traffic citations, was due to a “high level of turnover and limited staffing” within the court.

The effect of such a deficiency, the report stated, is that “errors or omissions” could be logged in the city’s financial statements.

The audit recommends that procedures be evaluated and new methods established to “ensure that all court records relating to municipal court cases and traffic citations can be located in a timely manner.”

“Per the Chief Magistrate, Kourtnie Nelson, once a full staff is placed here at Selma Municipal Court this matter will be addressed and handled immediately by organizing and filing all back-dated files properly to ensure that all records can be located upon request,” the report states alongside the “action taken” portion of the report. “The anticipated date to have this completed is January 2020.”

Nelson has since departed from the Municipal Court.

Elsewhere, the report states that “the activity of the bail bond and restitution fund accounts is not being reconciled on a regular basis and the municipal court is unable to produce a report to support the balances reflected in these accounts at year end.”

The audit likewise recommends that the city review the policies and procedures laid out in relation to the accounts and perform examinations on a quarterly basis.

Where action taken is concerned, the report stated that “municipal court personnel with work with the [City of Selma] Finance Department to establish policies and procedures that will be included in the Accounting and Finance Procedures Manual to ensure funds are reconciled on a regular basis.”

The action, set to be overseen by the city treasurer and implemented by the accounting manager, was set to be completed by January 2020.

The report also notes that local law enforcement officers are not signing  off on electronic traffic tickets and citations in a timely manner, if at all, as defined by Alabama law.

“Based on discussions with Municipal Court personnel, it has not been a part of the process taken involving electronic tickets/citations in the city,” the audit stated. “Furthermore, an electronic signature process is not being used as the magistrate or clerk (person responsible for administering the oath) have been physically signing the copy of the electronic ticket/citation.”

The audit notes that there are no “established policies and procedures to require law enforcement officers” to sign tickets or citations along with the magistrate, clerk or other personnel.

Again, the audit recommended that the court establish policies and procedures to address the matter.

As far as actions taken, the report states that court officials would work with the Chief of Police to create policies and procedures that would be completed by January 2020.