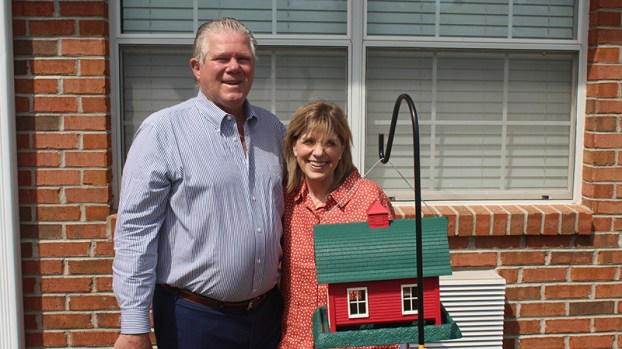 On Thursday morning, members of First Baptist Church arrived at Park Place Nursing and Rehabilitation Center to install birdfeeders in front of each of the resident’s windows.
“We’ve made a commitment to put a bird feeder in front of every window,” said First Baptist Pastor Dr. Jerry Light. “We’re starting here and we hope to move onto other facilities after this.”
Light said that the birdfeeders installed on Thursday would provide the facility’s residents with a sense of comfort during the Coronavirus outbreak, while they’re unable to visit with their family members or one another to prevent the spread of the virus.
Light said a few of the residents that already have bird feeders in front of their windows have expressed how much joy it brings them to wake up early and see the birds feeding outside their window.
“Sometimes, something as simple as that can give them a lot of joy when they’re confined and that’s what we want to provide,” said Light. “We don’t know when this Coronavirus confinement will end but we want to make sure we do this for them and continue it.”
Light said the project goes beyond simply installing the birdhouses, volunteers from the church will maintain the feeders on a weekly basis making sure that they are filled and clean.
“It’s kind of like the difference between a horse and a motorcycle,” said Light. “If you get tired of riding the motorcycle, you can always just put it in the garage, but if you get tired of riding a horse, you still have to feed it and take care of it.”
Light said it was Julie Bowline, a physical therapist at the facility in addition to being a member of First Baptist, that first brought the idea to the Church’s attention.
“It’s been hard for sure,” said Bowline.
Bowline said that she, and other’s in the facility, have been doing their best to keep residents connected to their families during this isolating time by helping them make Zoom and Facetime calls as well as spending a little extra time with them.
“If you can find some way to keep them connected it makes it much easier,” she said.
As the members of her church installed the birdfeeders outside each of the windows on Thursday, Bowline said she was overwhelmed.
“They’ve taken just a little idea and made it huge,” said Bowline “They really took the reins. All I did was mention it.”
Light said that the church has named the project “Eddie’s Part” after the Jack Russel Terrier owned by First Baptist members Ray and Angie Harrelson.
Though Eddie passed away a few weeks ago, Light said the canine’s good nature will continue in the mission of the project.
“He was always the first to welcome you whenever you’d go into their home and he’d stay right beside you until you left,” said Light. “He did his part to make people feel loved and welcome and we know that these birds will do the same.