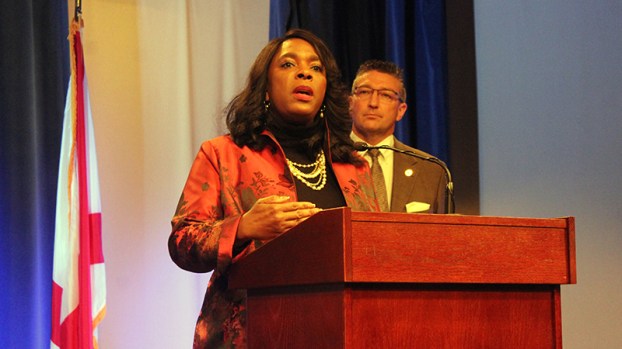 U.S. Rep. Terri Sewell, D-AL, hosted the first in a series of regular video press conferences aimed at remaining transparent about the federal response effort to the COVID-19 pandemic.

Sewell noted that more than 500 new cases of the virus have been reported in Alabama since Friday, adding that she expected to see a “huge surge” in cases across the state and nation in the coming weeks as federal funding is handed down and more testing sites are rolled out.

According to Sewell, Alabama is slated to receive $2 billion in funding from the federal government as part of the first round of relief packages that was approved by Congress and has already received $350,000 for community health centers in Alabama’s 7th Congressional District.

According to Sewell, the first 60 million Americans whose direct deposit information is on file with the Internal Revenue Service (IRS) will begin receiving direct payments the week if April 13; another round of payments will go out 10 days later and checks will be mailed at the beginning of May.

Sewell noted that the three relief packages Congress has already passed – the first allocated $8.3 billion to the response effort, the second expanded support for businesses and workers and the third approved direct payments to citizens – were a “starting point” but would likely not be enough in the long run.

Sewell stated that a fourth package is already in the works to focus on recovery efforts centered around medical treatment and the nation’s infrastructure – within that bill, Sewell hopes to secure free treatment for uninsured patients and see another round of direct payments.

“We will also be fighting for additional payments in this next package,” Sewell said. “I truly believe that a one-time payment will not be enough.”

But Sewell has more in mind for the imminent fourth relief package, including the addition of language that would prioritize the expansion of broadband and internet connectivity in rural areas across the nation.

“In this day and age, broadband is not only critical, it’s a necessity like water and electricity,” Sewell said.

Additionally, Sewell would like to see provisions that would provide more resources to struggling small businesses, as well as an additional expansion of unemployment benefits, additional resources to process the increased number of applications coming in and more resources for the health system and its workers.

Further, Sewell and U.S. Sen. Doug Jones, D-AL, are jockeying to include a provision that would allow Medicaid holdout states to expand the program at the original 100 percent federal match rate.

Sewell noted that she and Jones have tried to include the provision in all of the previous coronavirus relief packages and will continue trying to mount it to “any legislative vehicle that’s moving out of Congress,” but added that Medicaid expansion, which would be of immense value in testing and treating patients amid a worldwide pandemic, is something Alabama Gov. Kay Ivey and the Alabama Legislature can do right now.

“It’s still a priority, but it’s still something our governor…can do right now,” Sewell said. “Nothing is stopping them from expanding Medicaid right now.”

While Sewell praised Ivey for finally issuing a watered-down “stay at home” order last week, adding that the order “has always been a good idea” but is “especially a good idea now more than ever,” she noted that more can be done to protect the citizens of Alabama, while also taking U.S. President Donald Trump to task for a lackluster federal response – the congresswoman referenced the recent delivery from the national stockpile of 5,000 rotted masks to Montgomery, as well as a pending request from the Alabama Department of Public Health (ADPH) for 200 generators.

Sewell mentioned Selma by name when discussing her intention to ensure that the $2 billion already approved for Alabama trickles down to rural communities across the Black Belt and the rest of the state, all of which are struggling to cope with and overcome the COVID-19 outbreak, saying that she is “fighting for those resources to get into the hands of smaller towns in our state.”