‘The Chocolate Bunny’ reflects on an adventurous life in… 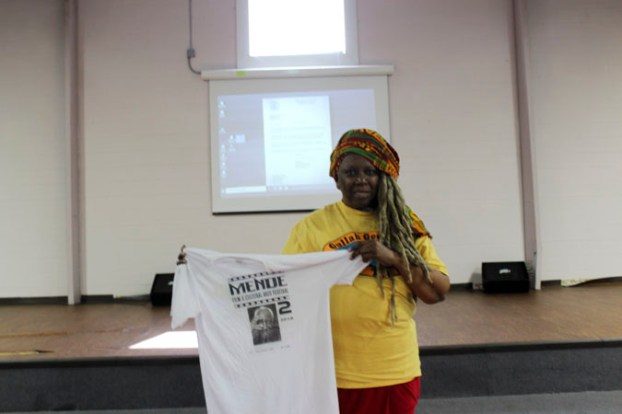 The Gullah Geechee Mende Film Festival made its first-ever stop in Selma during the Bridge Crossing Jubilee last week.

Suttles has ties to Selma because she said her family owns land in Plantersville, according to her father.

Directed and narrated by Suttles, 44 Daze chronicles the death of Trayvon Martin, a 17-year-old African-American high school student who was fatally shot by policeman George Zimmerman in Sanford, Florida on Feb. 26, 2012.

The 45-minute documentary focuses on how Sanford officials handled the incident. Zimmerman was charged with second-degree murder, but later acquitted because of lack of evidence. Suttles spent $10,000 of her money to make the film as a resident of Hallandale Beach, Florida.

“I wanted to know what city officials and police did and what they didn’t do,” Suttles said. “I put the Z instead of the S because that’s how Jay-Z spells his name.”

Suttles is passionate about making people aware of Gullah, a group of African-Americans who live in the Lowcountry region on the Coastal plain and Sea Islands of Florida, Georgia, North Carolina and South Carolina. They speak a creole language called the Gullah language.

The 73-year-old Suttles also made a film about the Columbia University protests of 1968, which she participated as a student at Barnard College.

The next film Suttles plans to make revolves around her life. Suttles became one of the nation’s first black female city managers at Oberlin, Ohio in 1979.