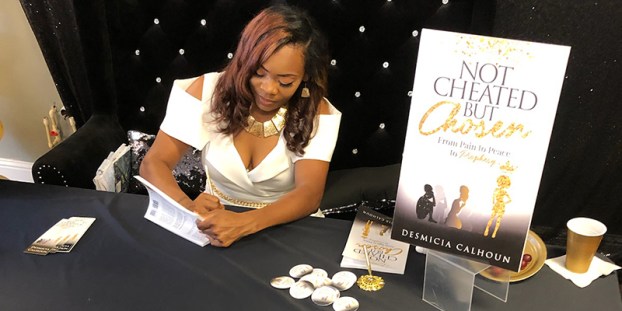 Selma native Desmicia Calhoun announced the release of her first book, “Not Cheated, but Chosen.”

The book was released on July 6 and within the first 14 days of being released, over 150 copies have been sold with readers calling it a “page-turner,” according to a release.

“Not Cheated, but Chosen” is a spiritual memoir focused on the Bible verse Jeremiah 1:5.

“Before I formed you in your mother’s womb, I chose you. Before you were born, I set you apart. I appointed you to be a prophet to the nations,” the release reads. “In the book, Desmicia takes readers on a journey from pain to peace to prophesy using five principles.”

Those five principles are:

Calhoun reflects on places in her own life where she felt cheated including losing her parents at a young age, divorce and raising young children.

“Your painful past is preparation for your prophetic future,” she said. “You must understand that everything you have experienced from birth to date is part of your evolution into a wiser prophet capable of proclaiming the will of God. Even those places where you feel cheated were chosen for you, by God, for His glory.”

Calhoun has over 13 years of military service and currently serves as an Army National Guard Guidance Counselor in Alabama. She earned a bachelor’s degree in organizational management and earned a master’s degrees in both early childhood education administration and student affairs in higher education.

Calhoun said this is the first of many books that will come as she “embraces her purpose” of being a prophetic writer.