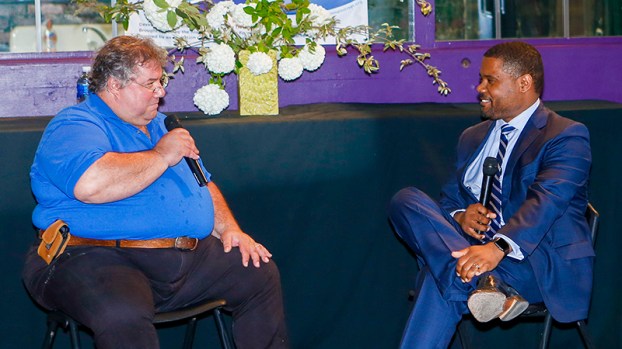 Selma Mayor Darrio Melton was the man of the hour Monday night at ArtsRevive, as he answered questions for the first installment of “Minutes and Moments with Mayor Melton.”

The new initiative from Melton is designed to initiate conversation with members of the community in an intimate setting.

As the clock struck 6 p.m., local radio personality Todd Prater with Alex FM started firing away with questions. Prater came up with his list of questions by polling people in the community to get an idea of what he wanted to ask Melton.

Prater’s first question for Melton was what transparency means to him.

Examples of transparency Melton shared with Prater and the ArtsRevive audience was a new monthly newsletter his office has started sending out. Melton said the letter is designed to inform the public about what is going on in different departments in the city.

Prater’s questions ranged from the mayor’s availability to citizens, how he can find common ground with the Selma City Council, showing up to council meetings, revenue streams and other hot topics, such as the infamous splash pad, which has been openly criticized by many on social media.

After Prater checked off the questions on his list, he opened the floor for citizens to ask a few questions.

Those questions were about 911 response time, tapping into tourism to develop more revenue, security at city hall and other topics.

Overall, Melton said he felt like the first “M&Ms,” which it is referred to, went well.

“I think it was great because it was a nice laidback environment. It gave me an opportunity just to talk, so I’m hoping as we do more, more people will come out, and we can have conversations about solutions instead of just about complaints,” Melton said after the one-hour question and answer session.

Melton said he encourages citizens to come out to the next Minutes and Moments and to come ready with questions.

“So often misinformation is given out, and as I said tonight, if you don’t have facts, you really can’t have an opinion,” Melton said.

“A lot of times people have opinions about things they really don’t know what they’re talking about, and those opinions become facts for some people. It’s not good for our community.”

A second event is in the works, and Melton said the public will be notified of the date, time and location once everything is worked out.