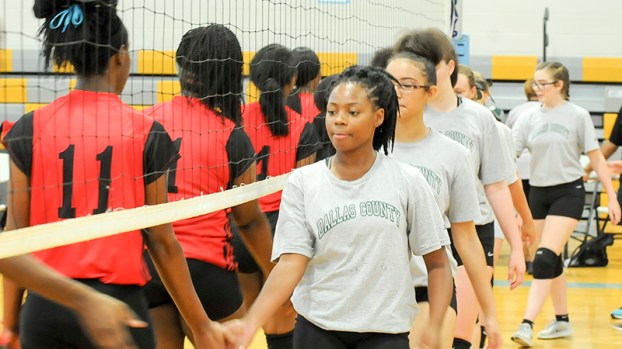 There was a lot of buzz Tuesday morning at Selma High School as five schools competed in the Selma High Volleyball Summer Play Date.

“We tried to get everyone in the area and in the surrounding areas to come out and just play competitive volleyball,” Selma High volleyball coach Katasha Turner said. “The more practice you get, the better you become. Especially in volleyball.

Robert E. Lee High School, Hale County, Dallas County and Southside brought both their varsity and junior varsity units to play against each other and the host team Selma.

“The play date is an opening season warm-up game against other teams that are not in our area to prepare us for our area games,” Lee coach Carolyn Williams said. “The team came and played harder than I expected them to, so I’m very proud of them.”

Even though the school season doesn’t start until September, there was a decent showing of fan support that traveled to watch the exhibition match-ups.

“The more people we have, the more encouraged the kids will be,” Waters said. “The kids see that they’re being supported so that makes them feel good.”

The 20 minute exhibitions were played back to back between Selma’s two gymnasiums. Each court had two officials with assistance from players who weren’t in the games.

The score was being kept until a team reached 25, then the referees would signal to reset the score and continue play until time expired.

The purpose of the play date is to get the girls back in game mode and ready for the upcoming season which begins in September.

“The purpose of the play dates is for our kids to get touches on the ball and be competitive,” Turner said. “It’s for them to be competitive and work on the skills we worked on in camp.”

The teams showed a mix of experienced players and new comers.

Even though the games didn’t count, the girls were playing as if they did.

“It was a successful Play Date,” Turner said. “Having both JV and varsity here means a lot, because it’s helping both teams. The coaches came and are doing their job to try and help put volleyball at a higher competitive level.”

The girls worked on their serves, volleys and spikes against some of the teams they will face this upcoming season. Every team had players diving all over the floor and calling for their chance to hit the ball.

Southside junior varsity coach Samantha Henry said she brought her team to the play date so they can get experience and exposure.

Getting the girls ready is a tall challenge. Experience is hard to come by in the Selma area because not many of the underclassmen played competitive volleyball before high school, according to Turner.

“In Selma, we do not have any middle school teams,” she said. “Which would be a blessing to have because it would help the high schools. They wouldn’t have to go over the same fundamental skills of passing, setting and serving again. They could expound on those at the junior varsity and varsity level.”

The next time the Selma area teams meet will be at the Dallas County/Selma tournament on Sept. 9.

“Keith, Southside, Dallas County, Ellwood and Selma will be playing in the tournament,” Turner said.