Mark Duke, wife will commute to Selma to work with Freedom Foundation

Word buzzed all over town tuesday as a couple of moving vans pulled up in front of the home of Mark Duke, head of the Freedom Foundation, and pulled to a stop.

By early afternoon, the curious had come out to take photographs of the moving vans with their cameras or cellular phones. Others stared and pointed.

For nearly two years, Mark Duke has been a topic of conversation in one form or another.

To some, he is a man sent from God and Parker, Colo., with a sizeable group of followers, which he calls volunteers, to help, as Duke has put it, “bring Selma together.” To Duke’s detractors, the ordained minister has caused division and suspicion in the community through the work of the Freedom Foundation volunteers.

Shawn Samuelson, a board member of the Freedom Foundation, said Tuesday the Dukes are not leaving Selma forever, but are going to commute.

“The Dukes have decided that they will commute back and forth to Selma as they will be spending time in several locations with their elderly parents who have been undergoing health problems. Mark and Becky are blessed to be retired and to have the freedom and flexibility to spend time with their families. They are both committed to spending time in Selma to continue the work with the Freedom Foundation,” Samuelson said.

The Freedom Foundation’s work will continue, she said.

Members of the Freedom Foundation moved to Selma in 2007 from Parker. The non-profit claims not to have any doctrine, but says Samuelson, is “an organization comprised of people from many different backgrounds.”

The Foundation has hundreds of volunteers in Selma, who attend different churches.

But the group began to draw fire after Allan McConnell, a cult specialist, and the Rev. Micah Gandy of Elkdale Baptist Church heard Duke and others discussing doctrinal-type issues on the radio program, “Real Talk” run by the Foundation.

Elkdale hosted McConnell i n April to speak about the doctrinal differences between traditional Christianity and what Duke was heard saying on the radio.

McConnell spoke to a packed church that overflowed into anterooms. The talk was streamed live on selmatimesjournal.com.

After McConnell spoke, nothing else was said publicly about Duke. McConnell started a Web blog in which he writes about Duke’s movements, sermons and people who have left the Freedom Foundation.

Last week on his blog, McConnell told his readers to show them “some good Southern hospitality.”

Writes McConnell, “If professional movers show up, perhaps some cold bottles of water and advice not to drink the Kool-Aid would be offered. If volunteers are doing the job, plenty of smiles and goodbye waves would be good.”

The Kool-Aid reference comes from the mass suicide at Jonestown nearly 30 years ago after many followers of Jim Jones killed themselves by drinking poisoned laced flavored drinks. The mass suicide came after Jones ordered the murders of some visitors to his camp in Guyana. Jones was leader of the Peoples Temple.

McConnell has often drawn parallels between Jones, a charismatic preacher and founder of the People’s Temple, to Duke and the Freedom Foundation.

On Tuesday, McConnell was in Selma. He posted this on his blog:

“There are moving trucks on Tremont Street — told ya so!”

But those who belong to the loosely knit group, Concerned Citizens of Selma and McConnell might not be gleeful for long.

The radio program, “Real Talk,” will continue Monday through Friday from 9 until 10 a.m. on WHBB, with Mark continuing as a co-host, Samuelson said.

The volunteers will continue working on the Tepper’s building, a former department store vacated years ago, Samuelson said.

Recently, architects for the project, Goodwyn, Mills and Cawood, completed the exterior plans for the building, which Samuelson said were recently approved by the Selma Historical Review Commission.

“Nothing has changed in regards to the plans for the renovation of the Tepper’s building,” she said.

Repeated calls to a cellular phone reported to belong to Duke were unsuccessful in reaching him.

Samuelson said Duke and his wife are on vacation in one of their summer homes out West and unavailable for comment.

Samuelson said for the last six months Duke has traveled for the Foundation and working consulting jobs in corporate America.

He has promised three years to the Foundation board, but works with other non-profits and companies. 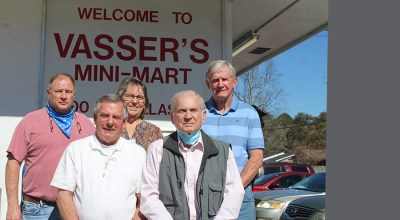